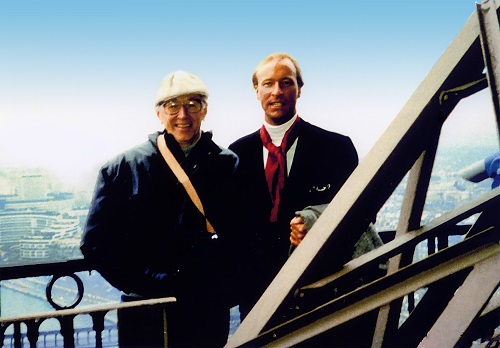 He was never a fan of cartoon art, but was always drawn to coloring books and the black outlines of the artwork, which he describes as being similar to the lines found in the artwork of famed Peanuts© creator Charles M. Schulz. Artist Tom Everhart is a classically trained fine artist who graduated from Yale University of Art and Architecture and continued post-graduate studies at the Musée de l’Orangerie in Paris. In his wildest dreams, the talented artist never imagined that his career path would lead him to painting the beloved Peanuts© characters of Snoopy, Woodstock, Charlie Brown, Lucy, and the gang.

In 1980, Tom Everhart met cartoonist Charles M. Schulz by chance when he was involved in a freelance project requiring him to draw and present Peanuts© renderings to Schulz’s studios. Having absolutely no education in cartooning, Everhart blew up some of the cartoonist’s strips on a 25-foot wall in his studio, which eliminated the perimeter lines of the cartoon box, leaving only the marks of the cartoonist. Completely impressed with Schulz’s line, he was able to reproduce the line art almost exactly, which in turn impressed Schulz at their first meeting. Although the commercial project would never come to be, from this meeting on, an odyssey of two artists would begin.

It wasn’t until the artist was hospitalized with stage 4 colon and liver cancer in the late 1980s, that he would become inspired and passionate about creating his own version of Schulz’s famous characters. During his month and a half hospital stay, Everhart describes having art history books from his artist friends and comic strips from Schulz as gifts. His mind began putting the two together and came up with body of work that he is known for today. He describes the feeling as “falling in love” and “ideas pouring out”; he was excited to begin putting his thoughts and ideas to canvas. “I couldn’t wait to get out of the hospital and get back to my studio,” explained Everhart.

Everhart not only recovered, but also went on to enjoy a 20-year personal friendship with the cartoonist and an artistic relationship greatly valued by both men. A mutual respect developed so powerful that Schulz encouraged Everhart to carry forward his comic strip creations to the fine art form. Everhart became the only fine artist to be educated by Schulz in his work and entrusted to create Peanuts© artwork under his direction.

Everhart’s original paintings and prints of the Peanuts© gang have gained worldwide acclaim, shown at museum and gallery shows around the world including the Louvre in Paris and now in Stone Harbor at Ocean Galleries. With the upcoming release of The Peanuts© Movie, Everhart’s artwork is more popular than ever. For more information on purchasing Peanuts© original art and prints, contact Ocean Galleries at 609.368.777 or visit Peanuts Art by Tom Everhart