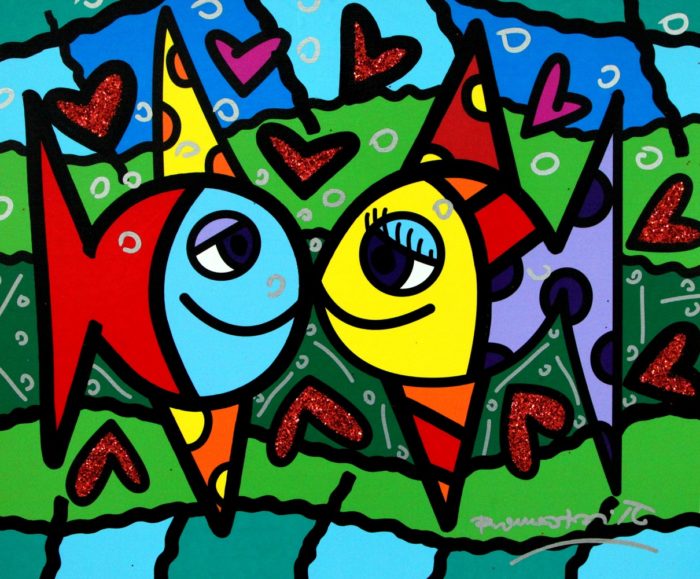 Ocean Galleries is delighted to welcome world-renowned pop artist, Romero Britto, for his first ever exhibition in Stone Harbor, NJ.  “Romero Britto – Brilliant World of Color” will include an impressive collection of artwork and sculptures on display at Ocean Galleries (9618 Third Avenue, Stone Harbor/609.368.7777) beginning Friday, August 4 through Tuesday, August 8, 2017.

Guests will have the opportunity to meet the enthusiastic and optimistic Romero Britto at specially gallery receptions taking place 7:00 PM to 10:00 PM on Saturday, August 5 and 1:00 PM to 4:00 PM on Sunday, August 6.

With an iconic style that the New York Times described “…exudes warmth, optimism and love,” Romero Britto is an internationally-renowned artist who uses vibrant, bold, and colorful patterns to reflect his optimistic view of the world around him.  His playful themes and hard‐edged compositions, combined with his unique talent, unshakable resolve, and belief in his art, have granted him worldwide recognition, with exhibitions in galleries and museums in over 100 countries.  The artist’s pop sensibility has leant itself to collaborations with global brands such as Audi, Bentley, Coca‐Cola, Walt Disney, Evian, Hublot, and Mattel, to name a few. Britto’s work evokes happiness and hope using a visual language all its own and is, simply, relatable to all.

Romero Britto was born in Recife, Brazil in 1963. Self-taught at an early age, he painted on scraps of cardboard or any medium he could find before coming into his own and traveling to Paris where he was introduced to the work of Matisse and Picasso. His appreciation of the Masters and combined influences of cubism with pop, helped to create his vibrant, iconic style.

In 1988, Britto moved to Miami and emerged as an international artist. In the following year, he was selected alongside Andy Warhol and Keith Haring for Absolut Vodka’s “Absolut Art” campaign and quickly began enjoying commercial success, collaborating with many well-known corporations and bringing his signature style to their products.

Britto’s artwork has been exhibited in galleries and museums worldwide, including the Salon de la Société Nationale des Beaux Arts exhibition at the Carrousel du Louvre in 2008 and 2010. In 2013, Maria Elena and Carlos Slim Domit invited Romero to be the first living artist to exhibit at Museo Soumaya in Mexico City.  He has created public art installations for the Mercedes-Benz Arena in Berlin (formerly O2 World), New York’s John F. Kennedy Airport, Cirque Du Soleil at Super Bowl XLI, and has been credited with the largest monumental sculpture in Hyde Park’s (London) history. Britto served as an official artist for the 2010 World Cup, ambassador to the 2014 FIFA (Fédération Internationale de Football Association) World Cup Brazil, and was invited to be an honorary torch bearer for the Rio 2016 Olympic Games.

Britto considers the role of an artist to be an agent of positive change. He serves as a benefactor, donating time, art, and resources to over 250 charitable organizations, and sits on several boards, such as Best Buddies International and St. Jude’s Children’s Research Hospital. He was recently named a founding inaugural benefactor of Harvard’s “International Negotiation Program,” by Dr. Daniel Shapiro, in his quest for peaceful conflict resolution.

“I believe that every human being has the power to do good for someone else,” Britto explains. “Everything is based on education. With knowledge and education, you can understand the world.”

In addition to an extraordinary collection of artwork and custom-framing, Ocean Galleries also offers a variety of hand-made crafts from local, regional, and national artists in America, such as glass, pottery, jewelry, and furniture.  All summer exhibitions take place at the Stone Harbor location of Ocean Galleries (9618 Third Avenue), which is open from 10:00 AM until 10:00 PM daily throughout the summer season. The Avalon, NJ location of Ocean Galleries (2199 Ocean Drive) is open daily from 9:00 AM until 5:00 PM.  For more information, call 609-368-7777 or visit oceangalleries.com

Click below to read some of the media coverage on the “Romero Britto – Brilliant World of Color” exhibit.

For more than 30 years, Ocean Galleries has provided quality art by contemporary artists to their clients while practicing the highest standards of credibility and integrity in a comfortable and unpretentious atmosphere.  With locations in Stone Harbor and Avalon, New Jersey, the distinguished art galleries feature an ever-changing display of artwork that includes local artists’ watercolors, nationally recognized artists’ originals, popular beach prints, and limited editions.  Ocean Galleries also carries fine furniture and hand-made crafts from America and around the world.  Both locations have on-premises custom framing with design specialists and professional framers who can offer a wide selection of mouldings and an endless combination of traditional and custom-designed matting to complement and preserve any art.  For more information, please call 609.368.7777 or visit www.oceangalleries.com