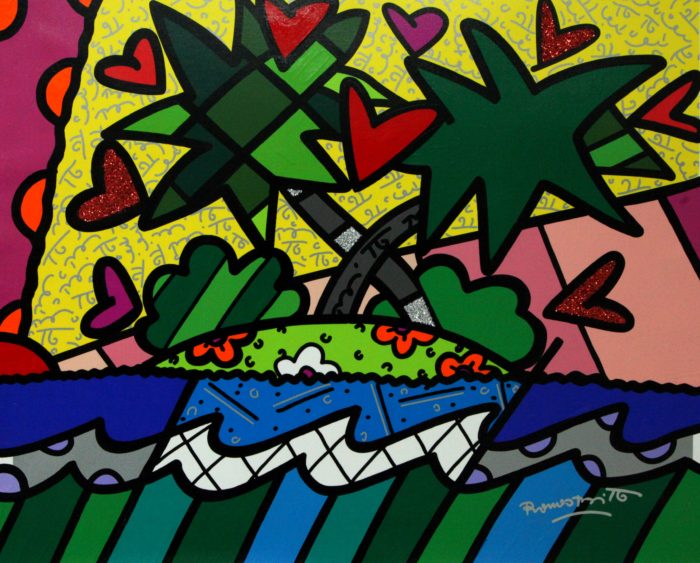 He travels the world spreading messages of hope and happiness with his artwork.  The neo-pop artist commonly referred to as “Britto” is arguably as well known for his charitable endeavors as for his iconic art, actively supporting charities, donating artwork, and sitting on foundation boards ranging from Elton’s John’s Aids Foundation to The Prince’s Trust, founded by Prince Charles, to St. Jude’s Children’s Research Hospital.

The first weekend of August, the remarkable Romero Britto, will make his way to Southern New Jersey for the first time, sharing a collection of his vibrant artwork and making a difference in the community with support for The Helen L. Diller Vacation Home for Blind Children in Avalon, NJ.

The “Romero Britto – Brilliant World of Color” exhibit includes an impressive collection of artwork and sculptures on display at Ocean Galleries (9618 Third Avenue, Stone Harbor/609.368.7777) Friday, August 4 through Tuesday, August 8, 2017. Guests can meet the effervescent artist at special receptions being held 7:00 PM to 10:00 PM on Saturday, August 5 and 1:00 PM to 4:00 PM on Sunday, August 6.

Although his art has brought him fame and recognition throughout the world, Britto’s passion and enthusiasm for helping others is just as impressive. Romero Britto donated an original portrait of Sir Elton John to help raise funds in support of the Elton John AIDS Foundation. The masterpiece, titled “Sir Elton,” was auctioned to assist in reducing the spread of HIV and AIDS and raised 130,000 pounds. This past March, Britto helped celebrate Elton John’s seventieth birthday by generously donating 50 fine art prints of “Music Man,” another acclaimed portrait of Sir Elton, which also raised funds for the Foundation, with 100 percent of proceeds going directly into funding the organization’s important work in Africa, Asia, and Europe.

Britto was appointed to the board of The Prince of Wales charity, The Prince’s Trust, which helps disadvantaged youth in the United Kingdom, providing professional development opportunities for unemployed young people, in-school programs combating truancy and underachievement, and support for ex-offenders to turn their lives around.  Romero Britto shares a similar mission to that of The Prince’s Trust and is very active in his philanthropic efforts, with a focus on engaging children in arts education and literacy programs. He has participated in numerous fundraisers for The Prince’s Trust, including donating an original painting, “Royal Crown,” which was auctioned along with lithographs signed by the Prince of Wales.  Britto describes his philosophy: “It is best to be a diplomat without having to represent a country.”

Britto’s art has long surpassed the typical canvas or sculptures that one might expect from a focused artist.  In January 2017, he inked a deal with Carlos Slim’s Grupo Carso (a conglomerate that includes retail stores) to create a line of apparel, handbags, and home décor items featuring the artist’s distinctive work.

In February 2017, he worked with Corus Entertainment’s Nelvana, Grey Matter, and United Talent Agency on a new television series for preschoolers called “Happy Art Happy Life,” which was inspired by his amazing artwork. The show mixes action, animation, and remote videos to introduce the world of visual arts, following “Romero,” a sharp-dressed bulldog who lives, paints, and sculpt in an exotic studio.

Adored worldwide, the artist was recently commissioned by the owner of Net Dragon, an online gaming business, to create a pig, an historic Chinese symbol of bravery. In June, Britto flew to China to celebrate the installation of the 30-foot-high sculpture, the largest sculpture he has created to date.

During his visit to South Jersey, Britto has committed to helping support a local charity that is particularly important to the gallery owners, the Helen L. Diller Vacation Home for Blind Children in Avalon, NJ.  Britto will be donating one of his iconic paintings for the organization’s fall fundraiser, Barefoot Ball, taking place on September 9, 2017 at the Windrift Hotel.  The Britto painting, which will be custom framed by Ocean Galleries, will be part of the Live Auction during the fundraising event.

The Diller Home provides a vacation for blind children in the region at no charge to families.  A stay at the Diller Home is a first-time vacation to the shore for many of the children.  The camp operates for eight weeks during the summer months, from mid-June to mid-August, with approximately 20 children (ages 7 to 15) attending weekly.  In the past five years, over 500 children have spent a week at the beach complements of the Diller Home, some of them feeling the sand for the first time.  Over $750,000 in financial aid has been provided to the families of campers who attend the camp at no cost.  For information on the Helen L. Diller Vacation Home for Blind Children, visit www.dillerblindhome.org/

The “Romero Britto – Brilliant World of Color” exhibit will be at Ocean Galleries (9618 Third Avenue, Stone Harbor, NJ/609.368.7777) Friday, August 4 through Tuesday, August 8 and will include a new collection of artwork and sculptures. Romero Britto will make special gallery appearances to meet guests and dedicate and sign purchased artwork from 7:00 PM to 10:00 PM on Saturday, August 5 and 1:00 PM to 4:00 PM on Sunday, August 6.

In addition to an extraordinary collection of artwork and custom-framing, Ocean Galleries also offers a variety of hand-made crafts from local, regional, and national artists in America, such as glass, pottery, jewelry, and furniture.  All summer exhibitions take place at the Stone Harbor location of Ocean Galleries (9618 Third Avenue), which is open from 10:00 AM until 10:00 PM daily throughout the summer season. The Avalon, NJ location of Ocean Galleries (2199 Ocean Drive) is open daily from 9:00 AM until 5:00 PM.  For more information, call 609-368-7777 or visit oceangalleries.com

Click below to read some of the media coverage on the “Romero Britto – Brilliant World of Color” exhibit.

For more than 30 years, Ocean Galleries has provided quality art by contemporary artists to their clients while practicing the highest standards of credibility and integrity in a comfortable and unpretentious atmosphere.  With locations in Stone Harbor and Avalon, New Jersey, the distinguished art galleries feature an ever-changing display of artwork that includes local artists’ watercolors, nationally recognized artists’ originals, popular beach prints, and limited editions.  Ocean Galleries also carries fine furniture and hand-made crafts from America and around the world.  Both locations have on-premises custom framing with design specialists and professional framers who can offer a wide selection of mouldings and an endless combination of traditional and custom-designed matting to complement and preserve any art.  For more information, please call 609.368.7777 or visit www.oceangalleries.com